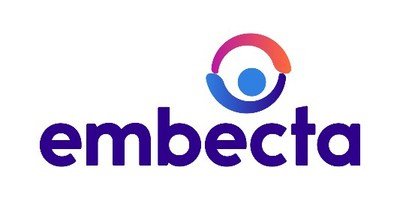 FRANKLIN LAKES, N.J., Dec. 6, 2021 — BD (Becton, Dickinson and Company) (NYSE: BDX), a leading global medical technology company, today announced that “embecta” [pronounced em-BECK-tah] will be the name of the independent, publicly-traded company that will hold BD’s Diabetes Care business upon the completion of the previously announced spinoff, which is expected to close in the second quarter of calendar year 2022.

The name “embecta” represents the future company’s commitment to people living with diabetes and its corporate heritage:  the “em-” prefix evokes empathy for people living with diabetes and the empowerment of the new company and its global team to seek new avenues of growth, and the “bect” embodies the BD spirit by embedding part of the legacy brand — the “bect” from Becton, Dickinson and Company — in the name. The logo consists of two bold curved lines, fused together to form a circle around a single point, which symbolizes the concept of bringing people together to form a collaborative, personal relationship and creates a strong connection with the BD visual identity.

“The Diabetes Care business can trace its roots back nearly 100 years to BD’s introduction of the world’s first specialized insulin syringe in 1924 and today is the leading producer of diabetes injection devices in the world,” said Tom Polen, chairman, CEO and president of BD. “We’re proud to see that shared legacy reflected in the new name.”

Devdatt (Dev) Kurdikar, worldwide president of BD Diabetes Care, who will become CEO of embecta upon completion of the spinoff said, “The Diabetes Care business is the trusted partner our customers and people living with diabetes have known for nearly a century, now with a single focus and the financial flexibility to pursue organic and inorganic innovations that will give more people a better life. We have assembled a diverse and experienced leadership team that is excited about the possibilities ahead, and our global team is passionate about the profound impact they can have on the growing number of people who live with this chronic and prevalent disease. Together, we look forward to making embecta synonymous with a life unlimited by diabetes.”

Leadership Team
Upon completion of the spinoff, embecta will have an experienced leadership team led by Dev Kurdikar, each bringing deep and relevant experience in the medical technology industry: